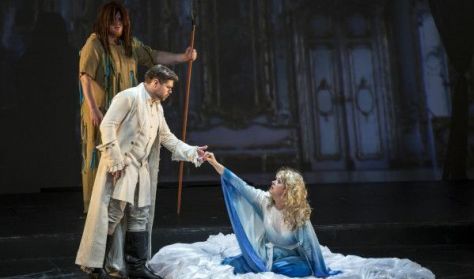 The path of young lovers is obstructed by trickery, jealousy and intrigue. This is a harrowing tale of silent, enduring love, of selfless sacrifice for the other, and the elusive feeling of being caught between two worlds.

Rusalka, the Water-Nymph
Based on the opera by Antonín Dvořák
Age: 10-14 year

What does a water nymph dream about? About exactly the same thing as her worldly companions. About a handsome prince who arrives one fine day and whose heart beats only for her. Yet in fairy-tales, just like in real life, not everything works out how we imagine or plan. The path of young lovers is obstructed by trickery, jealousy and intrigue. This is a harrowing tale of silent, enduring love, of selfless sacrifice for the other, and the elusive feeling of being caught between two worlds.

Rusalka, Antonin Dvořák's lyrical fairy-tale, is one of, if not the most popular Czech opera of all time. The work, which premiered in Prague in 1901, has enjoyed something of a renaissance in recent decades. In fact, it has been staged far more times around the world than the rest of Dvořák's operas put together. 'Rusalka' is a typical figure in Slavic folklore and also a common noun. Its meaning refers to a female entity closely associated with wetlands, swamps, underworld forces and fertility. The plot of the Czech composer's musical work, which is based on folk tales and literature and also incorporates Wagnerian influences, is deliberately reminiscent of Andersen's classic story of the little mermaid. In Dvořák's version, the restless, unsettled and necessarily benign water nymph becomes a pitiful, ill-fated and beautiful victim. This timeless story, which still bears much relevance today, will be performed by the conductor Péter Oberfrank and the Sinfonietta Erudita, with Attila Toronykőy directing.

Before the performance, between 9.45 and 10.30, we will be running a free (and playful) interactive session for children entitled Tune-up. We look forward to welcoming both school groups and individual school-age youngsters attending the subsequent performance. Please register via csip@mupa.hu by midnight on the Wednesday before the performance, specifying the number of participating children and their ages. The activity is recommended for children aged 6 and over, and will take place with a minimum of six children.