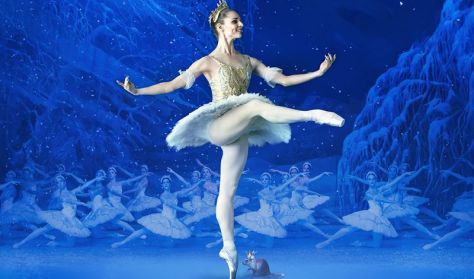 Tchaikovsky's Nutcracker has for decades been an essential part of the Opera's run-up to Christmas. In memory of Vasili Vainonen and Gusztáv Oláh, we first presented for Christmas of 2015 a newly buffed-up show that follows classical ballet traditions while still conforming to the requirements of 21st century dance and set design. Partnering with Tamás Solymosi to choreograph a new fairy-tale ballet for the classical-music piece is a true Nutcracker specialist: the internationally renowned Wayne Eagling. This is the first time in the life of the Hungarian National Ballet that an artist of such worldwide stature has developed a choreography tailored specifically to its members, as well as taking inspiration from them.

“This new choreography by Wayne Eagling and Tamás Solymosi is not only modern and as brilliant as one would expect, it is also a sort of homage to the legend, as it might be called, to the creative work of Vasili Vainonen and Gusztáv Oláh. The latter considered the sets for The Nutcracker to be the greatest “show” of his life, which is continuously reflected in Beáta Vavrinecz’s own sets in the current production. Nóra Rományi’s costumes are classic, beautiful and timeless.” (Eszter Veronika Kiss, Mno.hu)

In front of the house there is an ice-skating rink and a vendor of roasted chestnuts. One after the other, the guests arrive to celebrate together with the family.
The Christmas party

The guests gather around the beautifully decorated Christmas tree, where a great number of presents are waiting for the children. Marie's Uncle Drosselmeier also arrives, accompanied by his nephew, and entertains the guests with a little home puppet show. The performance is about the battle fought between the Nutcracker and the Mouse King over the Princess (who is portrayed by Marie's sister, Louise). Drosselmeier gives the nutcracker doll to Marie, who happily dances with her new favourite. Fritz thoughtlessly grabs the nutcracker doll from Marie, breaking it. Fortunately, Drosselmeier is able to fix the toy. The Christmas festivities close with everybody joining in a dance. The guests go home, and the children get ready to retire for the night. Marie goes to bed holding her new toy.

Act 2
Marie's room
Full of happiness and joy, Marie falls sound asleep in the children's room, naturally with the Nutcracker doll she has received beside her. The clock strikes midnight. As Marie dreams, everything seems to grow to an enormous size: the Christmas tree, the gifts, and the furniture. Even Marie herself is transformed: into a Princess. The puppet show comes to life. The Mouse King leads mice and rats in preparations to attack the house and Christmas tree. In her fright, Marie hopes that the Nutcracker (who is none other than the Nephew) will come to her aid. At the head of an army of lead soldiers who have come to life, the Nutcracker defeats the Mouse King.
Journey to the Land of Snow

The room and the house transform into a forest winter wonderland. Marie – now Princess Marie – and the Nutcracker Prince delight in the Waltz of the Snowflakes together and then dance a lovely, lyrical duet to show their feelings for each other. They then bid farewell to the flurrying snowflakes.

The inhabitants of the fairy-tale realm adoringly welcome the prince and his bride, Marie, to Drosselmeier's Snow Crystal Palace. A series of dance divertissements, in which the "residents" of the realm introduce themselves, ensues. A lively Spanish trio is followed by an Oriental snake-charming dance. Three Chinese dancers then entertain the guests with jumps and fast spins before the magnificent Russian dance is opened with a male solo.
In this version, the pas de trois is a brilliant variation for “rococo” ballerinas, which leads, as the greetings conclude, to the climax of these divertissements: the Waltz of the Flowers.
After the waltz comes the grand pas de deux between Princess Marie and the Nutcracker Prince, a duet constructed in keeping with classical tradition as an adagio, two variations and a coda testifying to the fulfilment of their love. In the finale, they are joined by the entire corps de ballet and the enchantingly lovely inhabitants of the Snow Crystal Palace.
But as this marvellous and dizzying dream ends, we are returned to Marie’s room, where it is Christmas morning. Fritz rushes in to join her, and they tell each other their dreams.
Marie herself is unable to say whether the Christmas magic was something she dreamed or actually experienced.