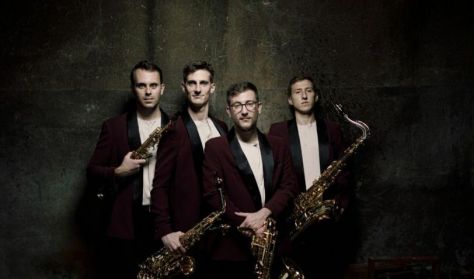 Kebyart - This mysterious-sounding name was created by fusing the words 'kebya' and 'art' - kebya is a style and genre of Balinese gamelan gong music. The Barcelona-based Kebyart Quartet was founded by four saxophonists who have stated that the contrasts in tempo, dynamism and colour of their performance style are inspired by traditional Balinese ecstatic music. You can encounter these young talents and their playing abilities in the third concert of the Rising Stars Festival.

In the same way that a soprano, alto, tenor and baritone can perform in the same choir, so can the velvety-nasal sound of the soprano, alto, tenor and baritone saxophones be smoothly combined. Playing these four instruments, Pere Méndez, Víctor Serra, Robert Seara and Daniel Miguel show the world how the instrument family invented by Adolphe Sax is by no means tied exclusively to the world of jazz. The Kebyart repertoire has three sources: the saxophone quartet's original works, compositions from new commissions and arrangements of other works. When it comes to the latter, we can say that the whole of musical history lays open before them. Critics have praised Kebyart shows for their passionate and vibratingly thrilling performance style. Since its formation in 2014, the quartet has appeared in countless major concert halls across Europe, from the Concertgebouw in Amsterdam to the Elbphilharmonie in Hamburg and the Musikverein in Vienna, and has also won international competitions in Switzerland and Austria. For their Müpa Budapest concert, the group will perform works from Stravinsky, Florent Schmitt and the Mendelssohn siblings, while the contemporary work comes from the exciting experimentalist Jörg Widmann.